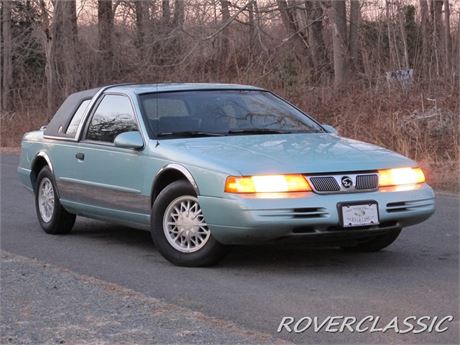 At its 1989 debut, the Cougar was marketed largely as the flagship coupe of the Mercury division. As Mercury revised its model line during the 1990s, the Cougar became the sole two-door model offered by the division. As market demand shifted away from large two-door coupes, the Mercury Cougar and Ford Thunderbird were discontinued after the 1997 model year, with the final example produced on September 4, 1997.

The seventh-generation Mercury Cougar is built upon the Ford MN12 platform.Designed specifically for the Mercury Cougar and Ford Thunderbird, the MN12 chassis retained the use of rear-wheel drive. While its exterior footprint changed negligibly, in a major change, the wheelbase was expanded nine inches to 113 inches (longer than a Mercedes-Benz 560SEC).

Centered around the design of the MN12 chassis was its use of four-wheel independent suspension in place of a live rear axle. With the exception of the Chevrolet Corvette, the Ford MN12 chassis marked its first use in a mass-produced American automobile. In front, the Mercury Cougar was configured with a short/long arm wishbone suspension. As an option, the Cougar was available with 4-wheel antilock disc brakes (standard on the Cougar XR7).

As part of the 1989 redesign, the MN12 chassis was powered solely by a 3.8L V6, as the lowered hoodline of the MN12 was too low to properly house the 5.0L V8, the engine was removed from the model line (marking the first time no V8 was available for the Cougar or Thunderbird). LS and XR7 trim Cougars were offered with a naturally aspirated 140 hp version of the V6. The naturally aspirated V6 was paired with a 4-speed automatic transmission.

The Caliente (Spanish for 'hot') was a package created by E&G Classics in Florida. Included in the package was a vinyl half roof with special C-pillar ornamentation, a dash plaque, and matching keychains, all with the CALIENTE logo. Total number produced is unknown. The 1994 model year marked a pivotal change in direction for the Cougar. It said goodbye to many traditional things of the past and fully embraced a modern future. Sales for the new model maintained their pace nicely as customers flocked to the new  smoother styling and better performance. The 1994-95 Cougars will probably go down in history as the epitome of the 1989-97 MN12 design.
Questions & Answers Sign in to post a question