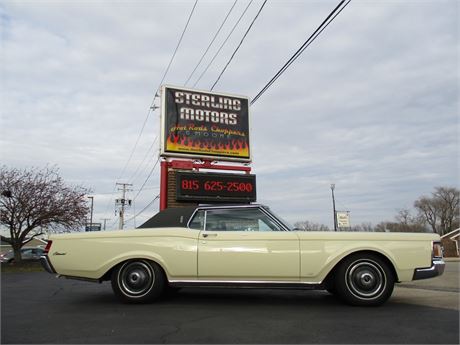 The Continental was first produced by Ford Motor Company’s luxury division in 1939. 1969 was the last year of the 4 generation Continental which was produced from 61 – 69. Even after shedding 15” in length over the 1960 Mark V the 1961 Mark III was still heavier than comparable Cadillacs. This was a result of management at Ford being committed to producing the finest mass produced domestic automobile of the time, a reputation it achieved.  In 1966 the Continental underwent a mid-generation redesign and introduced a coupe as a hardtop without pillars. Created by Lee Iacocca the Mark III was introduced for 1969 with standard equipment that included a 460 ci V8, a C6 automatic transmission, power steering, power brakes, power windows, vacuum activated concealed headlamps and a split bench with power front seats. It was optioned with Yellow paint, a Dark Ivy Green Metallic leather interior, simulated Rosewood interior trim panels, a Cartier clock, power door locks, cruise control and air conditioning. This is a 2 owner car that last transferred ownership in 1977 and has been well taken care of since day one. It currently has 49,048 original miles and is completely original with the exception of the normal wear items. Everything is working properly except for the clock, the gas gauge, the power antenna and the a/c needs recharging. It was just serviced and runs great. We would appraise this as a # 2 car which would currently be valued at $24,350. We know it is a buyer’s market and are serious about selling this gem so we have priced it accordingly. If you like what you see you better get in touch with us before it’s too late!