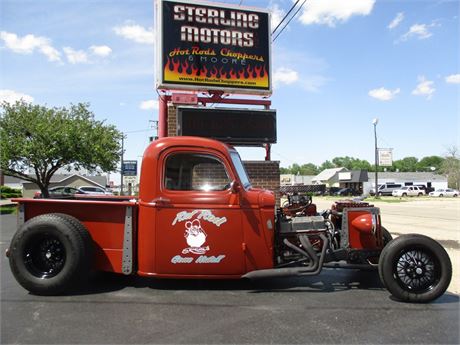 This is one of the best built Rat Rods out there. In fact it is so nice we would almost classify it as a Street Rod but have chosen not to because of the individualized touches this sweet rod possesses. The cab is from a 1938 Chevrolet Pick-up but that is about the only thing from 38 on it. The frame, front end, 10 bolt rear end and all lights came from a 1976 Chevy S-10. The heart of this rod is a 350 crate engine equipped with a Thumper Cam that is fed via an 850cfm carb sitting atop a high rise Edelbrock intake that sounds just plain nasty ripping through its performance headers with hidden mufflers. It is estimated to be putting out about 450 hp which is put to the 10 bolt posi rear end (3:31) via a performance built turbo 350 tranny that has been fitted with a cooler, a 3200 stall converter and a line lock. The cab is 100% metal and the bed was hand fabricated by the builder who has an incredible eye for detail. In fact well over a thousand hours was spent welding nuts together to make a custom intake cover, a rear bumper, the door handles, the exterior mirrors and a variety of other parts. The grille was modified from a stock 38 Chevy Pick-up to add some style while retaining the classic look of a 30’s Chevy truck. You will find that the power brakes and steering make it breeze to drive and with a 20 gallon fuel cell you have the ability to pass a lot of gas stations before stopping. It was finished in a sweet Red Oxide paint with some sweet graphics that were air brushed on and has an awesome stance with its 15” wire spoke rims sporting fat meaty 265/75R15’s on the rear and skinny 155R15’s up front that is guaranteed to catch every eye you drive by. It has just 2,351 miles since it was completed and was fitted with a heater as well as windshield wipers so that it can be driven in less than ideal weather.  We have priced this rat rod to sell so if you’re interested you better pick up the phone before someone beats you to it!