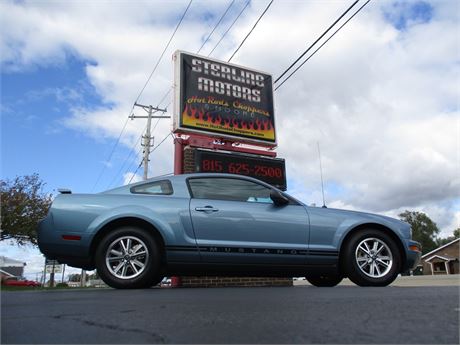 The Mustang is a series of automobiles manufactured by Ford continuously since 1964 and is their longest produced model. The 5 generation Mustang was introduced at the 2004 North American Auto Show as a 2005 model year and continued through 2014. The styling is reminiscent of the fastback models of the late 60’s which was referred to as retro-futurism. This particular example is a Deluxe model equipped with a 210hp 4.0L SOHC V6 mated to a 5 speed manual transmission. It was optioned with A/C, a premium stereo with CD player, the exterior sport package with rear wing spoiler, ABS brakes and bright machined cast aluminum wheels. It has a gorgeous Windveil Metallic Blue paint job that looks great with its light graphite interior. It is a one-owner car in pristine condition that has been pampered since day one. It currently has 32,102 original miles and everything is in perfect working order. If you have been looking for a clean unmolested 5 gen Mustang you will be hard pressed to find one in as nice a shape with such low mileage!