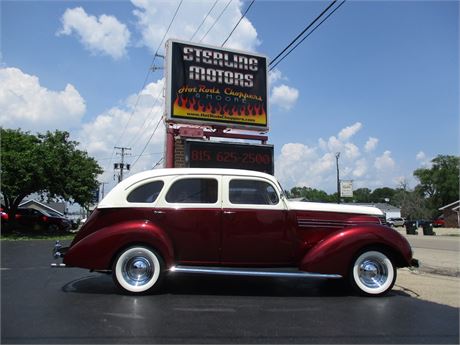 The 1930s was a decade of huge change in automotive design, more so than any that have followed. Cars went from upright, spindly, 1920s carriages to appearing full-bodied and streamlined, in the period style. One of the most underrated, yet distinctive, American automakers of this decade was the venerable Hupp Motor Car Corporation, and its final full-blooded Hupmobiles of 1938 and 1939 presented a brave and attractive face to the world. This Specific Hupp has been customized with the following upgrades a 318 V8 Dodge engine which had 19000 miles at the time of the build and now sits with 25,000 miles. It is equipped with a 3 speed mopar transmission mated to a 9” Ford rear end. The Brakes were upgraded from drums to disc all around. The transmission was equipped with a push button style shifter that works flawlessly. A brand new battery was put in the car as well. A fully custom interior was put in including power seats and a fully custom stereo system. As well as a vintage air system with A/C, heat, and defrost. There are a couple of minor flaws in the paint and a small crack in the rear drivers side door window all of which will be in the photographs. So if you are interested in owning a piece of history like this one you better jump on the phone before its too late!