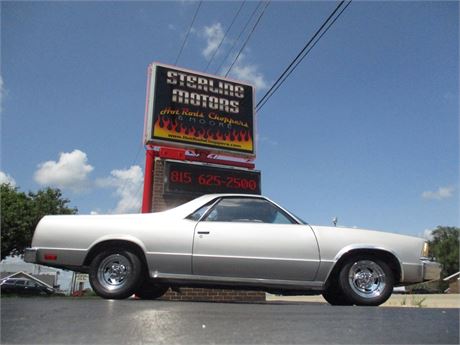 The El Camino was produced by Chevrolet from 1959 – 1960 and again from 1964 – 1987. Although it is considered a pick-up it is different than a standard pick-up as it was adapted from a 2 door station wagon with an integrated cab and cargo bed into the body. The 5 generation was produced from 1978 -1987 and adopted a trimmer sharp edged style similar to the Malibu’s. Standard equipment was a Buick V6 and the 305 ci V8 was optional. This particular example was upgraded with a 350ci V8 that was rebuilt and installed right when the odometer flipped over 100,000 which was just over 20,000 miles ago. At the same time it received a rebuilt Turbo 400 tranny and the original 10 bolt posi rear end was gone through as well. The engine boasts and Edelbrock hi-rise intake and 4 bbl carb, is fired by a Delco Remy electronic ignition and sounds just plain nasty ripping through its dual performance exhaust system. It has power steering and brakes and it was an a/c car but the a/c components have all been removed. The interior is black and gray and is in good shape with the exception of needing a headliner. The stereo was replaced with three micro gauges which include voltage, oil pressure and water temp. There is also an added micro tach jest left of the fuel gauge. At the same time the engine was upgraded it was also repainted in a beautiful silver metallic which has held up quite well. All said in done this is a perfect driver which could easily be upgraded while enjoying her. With a few dollars spent in the right places there is a lot of opportunity for appreciation left in this one. Based on its current condition we would appraise it as a solid # 3 car which would have a current value of $12,127. We have priced it for a quick sale as you can see so if you like what you see you better call us before it is too late!